Look below to see a sample of our team's various professional publications and conference presentations.

McConatha, J. Tahmaseb, & Mauriello, M. (2006, June). Constructing a meaningful retirement. Presented at the Fourth International Conference of the Dialogical Self in Minho, Portugal.

Mauriello, M., & McConatha, J. Tahmaseb. (2006, May). An investigation of the relationship between style of humor, life satisfaction and perceptions of stress. Presented at the Association for Psychological Science 18th Annual Convention in New York, NY. 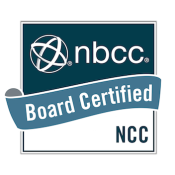 A National Certified Counselor (NCC) represents an individual's voluntary completion of and commitment to national standards determined by the counseling profession.  Several members of our team have achieved this level of certification.